A review of Jax Jacki Brown’s “The Politics of Pashing” in QDA: A Queer Disability Anthology edited by Raymond Luczak (Squares and Rebels, 2015) 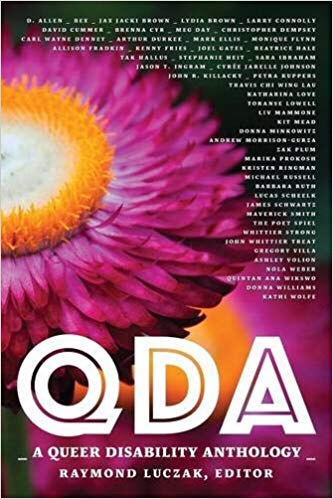 Jax Jacki Brown’s autobio story “The Politics of Pashing” explores the visibility of Queerness and Disability and the politics of staring. Jax explores her ability to reverse staring that happens as a Queer wheelchair-user by “pashing” (kissing passionately) in public and playing with her “eye-catching” nature by dying her hair red, wearing a rainbow neckerchief and overlaying her body “with signals of queer sexuality”. Instead of being the object of staring by an ableist, heterosexist society, she takes power away from people who would use their ableist glare by instead reversing the stare and making her body a display of fierce sexuality.

Often folks with disabilities and Queer folks are taught not to show our sexuality in public. We are taught that holding hands, kissing, and hugging are too icky for the straight, able-bodied cis-gendered public to handle. We are relegated to private spaces. A lot of that “teaching” happens through the stare… and, more specifically, a form of the stare that is openly hostile – the glare. We are Othered from public spaces, and it is a radical act to kiss in public, to demonstrate our love and sexuality in spaces that are hostile to anything that doesn’t conform to a heterosexist, ableist ideal. Jax’s acts of kissing seem like such little things – just a kiss – but when our kisses are treated as threatening, the act of kissing has power. It asks the question of why we are excluded from public spaces, it gives us power over the way we are stared at, and it remakes public space into a space where we can assert our presence and resist erasure. She tells her readers “Until disability and sexual diversity become more visible in the media, my kissing in public will never be a simple act. My pashes will always be political, enacting a complex interplay between my queer and disabled identities, and my pride in these two parts of myself.”

To find out more about QDA, go to http://www.squaresandrebels.com/books/qda.html

To discover more about Jax Jacki Brown, go to http://fukability.blogspot.com